Clicky Blog
Home Blog New features. Some of them might seem broken, and here’s why!

Our new release is out. It’s been in the works for almost 30 days. There is metric happy ton of new stuff in here, especially if you use goals. But… it’s been a LONG 48 hours preparing for some big database changes behind the scenes, so the last thing I want to do right now is write the nice, detailed blog post this release deserves. I’ll do that after some sleep! Plus, that will give the database servers a chance to process some of the new data we’re tracking, so I can show you screenshots of the new features with real data from Clicky’s traffic.

If you have no idea what’s new, please see this post from a few weeks ago, where we announced what was coming soon. There’s a lot more to this release than in that post, but it covers most of the major points.

There are a few features I want to discuss right now, because if I don’t, you’re going to think they’re broken. That’s because they rely on a core feature that we just added for unique visitors, where we now track how many times each unique person has visited your site, and the session ID of their first visit.

Previous to today, we were not storing this information in an optimized way. Part of this update changes that, and hence we can use this information in a couple of interesting ways (with more to come in the future). So, now we have the ability to store it, but that doesn’t mean it’s magically there already. There are scripts running in the background that are parsing through data all the way back to April 16 2010, which is the date we started tracking “true” unique visitors. Based on the speed these scripts are running, we estimate it will take most database servers between 1 and 2 weeks to complete. So until that at least 2 weeks have passed, if you see some strange numbers – this is why.

Here are the ways we are using this data right now: 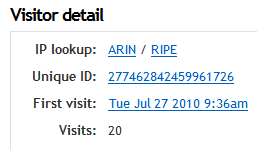 When viewing visitor details, previously we only showed the date and time of their first visit. But now, we’ll also give you a link directly to that first session. This allows you to quickly see what this visitor did the first time they visited your site. Quite interesting, if I do say so myself! But, until we have gone through the last 10 months of data and “discovered” their true first visit, the link probably won’t be right. It will just be a link to their oldest session as we have thus far determined. You may notice we’re also displaying the total numbers of time this person has visited. This also won’t be accurate until this 10 month chunk of data has been fully processed.

Goals: Time to goal, and visits to goal

When a visitor completes a goal, we now check out how many total visits they’ve had and how long ago they first visited as of that point in time, and store that calculation in the database. When viewing your goal report, we’ll show you the average of these two values for all visitors who have completed that goal for whatever date range you are viewing. This gives you a great way to gauge how quickly your visitors convert on average. (Also, we’ll only use a visitor’s data in this calculation the first time they complete a goal, so the numbers don’t get skewed by people who complete the same goal multiple times. However, this aspect of your historical data is not being post-processed. So if you have goals that can be completed more than once, until most of your repeat customers have completed the goal at least one more time, these numbers may be wacky).

The screenshot above is one of the goals we track, new user registration, as of about 30 minutes past midnight on this wonderful Friday morning. We have 13 new users, with the average user taking 2 visits and 1 day, 12 hours from the time of their first visit to when they finally registered. (I think there’s a huge outlier here, when I viewed it about 5 minutes before snapping this screenshot, the average time was 3m 30s. I’m also noticing a bug now – the “visits” number is supposed to be rounded to the nearest tenth of a number, not to a whole number – I’ll fix that tomorrow!)

Since we were already tracking the time of their first visit, the “time to goal” value should be mostly correct (excluding your repeat customers for now), but the “visits to goal” will not be, until we have gone through this 10 month period of data for all of your visitors.

This post was much longer than I expected, and I only covered 2 out of maybe 10 major new items. I will write a nice post tomorrow detailing everything that’s new. I just wanted to clarify a few things tonight so you don’t think these particular new features are broken – they just won’t be accurate until a few weeks have passed. 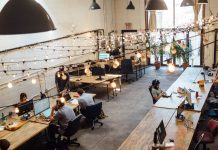