We just pushed some updates to heatmaps today.

First, we’ve extended the storage time to 6 months, up from 3. When we released these about 15 months ago, we were worried that they would take up too much space if we kept them around for too long, so we were limiting to 3 months of data. It took a while before “lots” of people were using them, so we couldn’t analyze the impact on storage space fairly reliably until recently. Good news, they take up less space than we had anticipated because we made some good decisions on the design side of things. Of course, the data older than 3 months from right now has already been purged, so you don’t have 6 months now. But 3 months from now, you will.

Second, we added a few new filter options when using heatmaps via the on site analytics widget. The new filters are under the “More…” menu, as shown below. These new filters allow you to view heatmaps for a page for just new visitors, returning visitors, visitors online now, or “registered” visitors. Registered means they have a “username” custom data field attached to them.

We’ll probably add a few other filters as we think of them. What would you like to see here? One thing we considered was some kind of engagement filter, e.g. only visitors who bounced or only visitors who did NOT bounce. However, if you think about it, almost everyone who bounces would not have clicked anything on your site, so it wouldn’t really tell you much. 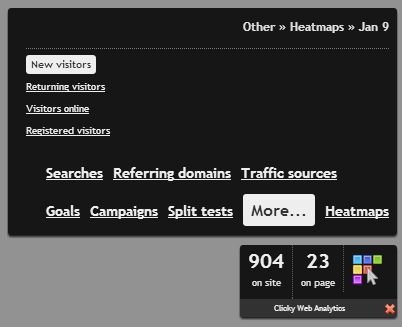 Last, we changed the scaling of the heatmaps. The problem was that for pages with lots of clicks, there would generally be a few extremely “hot” areas, e.g. in the navigation bar, and they would be so much hotter than the rest of the page, the other clicks would not even be visible. We’ve changed it so the scale of hotness now only goes from 1 to 10, rather than 1 to whatever it would happen to be as stored in the database.

Here is an example of a heatmap for our homepage using the old method, for “all clicks”:

Most visitors coming to our site are already customers, so the two login links are going to be the most clicked items, by about a thousand miles. Of course, there are plenty of other clicks on this page (e.g. new people signing up are going to click the big ass “register” button), but we can’t see them unless we apply some filters first, such as only showing visitors who completed our “new user” goal. It would be real nice to be able to see ALL the clicks on this page though, wouldn’t it?

So here’s what the new scaling method does to the exact same pool of data in the last screenshot, most of which was completely invisible:

It’s certainly noisier but the hot areas still stand out, and yet you can see every single click on the page, because the range from min to max is so much smaller.

Let us know what you think!